Rosia Montana is a Transylvanian village in the Apuseni Mountains where in 2000, the Rosia Montana Gold Corporation announced its intentions to openthe largest open pit gold mine in Europe.

In order to execute this project, the company wanted to blast away 4 mountains, relocate 2064 privates properties, tear down 975 houses (out of which 41 houses are considered national heritage sites), demolish 7 churches and relocate 11 cemeteries.

The company expects to extract around 285 tonnes of gold and 1361 silver annually using 12 000 tonnes of cyanide with the creation of 634 jobs during a period of 17 years.

The history of Rosia Montana is related to the history of gold mining because the exploitation of the mine started in the Roman era (1881 years) and continued until 2006. The former mine has already revealed the negative impacts of mining activities with the deterioration of the water and soil quality.

This project has divided the population of the community of Rosia Montana due to the fact that most of the inhabitants were mine workers and the closure of the local gold mine in 2006 resulted in high levels of unemployment.

In 2000, a strong local opposition to the gold mining project quickly emerged when the Canadian mining company, Gabriel Resources, announced its intentions to destroy the historic village of Rosia Montana.

Save Rosia Montana Campaign -the biggest environmental movement in Romania - was born. The campaign was coordinated by the local association Alburnus Maior. And this movement spread all over Romania and Europe.

The main concerns were the excavation of the mountain tops, the degradation of nature, the loss of cultural heritage but above all, the use of the cyanide due to the Baia Mare accident in 2000 (See below).

The huge cyanide leakage from 2000 in Baia Mare is obviously still in the minds of the population. When the dam of a gold mine in the region of Baia Mare broke, more than 1000 millions litres of water polluted with cyanide were released. It ended up in the rivers Lapus, Somes, Tisza and eventually the Danube, that carried the water to the Black Sea. Flora and Fauna around the river was completely destroyed. The disaster was called the worst in Europe since Chernobyl.

A victory for the civil society

The biggest social movement after the fall of communism in 1989 took place for Rosia Montana with the named of “The Romanian Autumn”. People marched on the street every saturday, starting on 1 September until February 2013. Eugen David, president of Alburnus Maior explains that:

“The movement doesn’t have leaders, it is just consciousness. It is impossible for Victor Ponta (former prime minister) to talk to 25,000 people in Bucharest plus thousands nationally and internationally. Our demands are not open for discussion and are not negotiable, we will be in the streets until each and every demand has been honored.”

In December 2013, Romania’s government attempted to modify the country’s mining law in favor of the mining industry. Unconstitutional expropriation law arose in favor of the mining industry. The bill consisted of unconstitutional expropriation proceedings, the obligation for authorities to issue permits, exemptions from the applicability of the law on historical monuments, natural monuments and European water framework.

This bill was denounced by civil society and was rejected by the Romania’s Lower House in December 10, 2013.

Gabriel Resources lost a crucial parliamentary vote of confidence.  After lengthy debates inside parliament and widespread demonstrations throughout the country, Romania’s deputies rejected a series of amendments designed to kick-start the hugely unpopular Rosia Montana mine development. This decision was an unprecedented victory for Romania’s civil society. 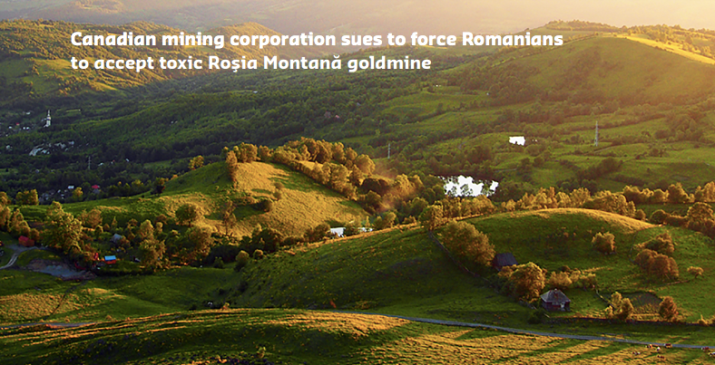 They are asking two per cent of the entire value of the Romanian economy in compensation for profits lost .

Moreover, the mining company’s legal bills are being financially backed by a Wall Street hedge fund in return for a claim of the spoils.

To avoid facing these costs, the Romanian government may be forced to open the mine, or Gabriel Resources could just walk away with a vast amount of public money as compensation.

What is tribunal arbitration?

See the explanation of the TAFTA (Transatlantic Free Trade Agreement) and tribunal arbitration (investment arbitration) in this video:   https://www.youtube.com/watch?v=zHK1HqW-FQ0

Rosia Montana has an archeological and cultural value with its pre-roman and roman mine and numerous monuments dated back to different time periods. According to a study made by Oxford and Leicester University, “The Roman mines at Rosia Montana are the most extensive and most important underground mines known worldwide”.

In 2009, the ARA association, an NGO specialising in architecture restoration and archaeology, submitted a detailed proposal for Rosia Montana to be included on the country’s tentative list of UNESCO world heritage sites.

Despite the strong support from the national and international scientific community, the request was ignored by 10 ministers of culture. The act of adding Rosia Montana to the country’s list of tentative UNESCO can only be done withthe signature of aMinister of Culture.

But finally on 5 february 2016, Rosia Montana was submitted on the list of tentative UNESCO site by a minister of culture. “This is not just a huge gain for our cultural heritage, it’s a great victory for civil society- for the thousands of people here and abroad demanding for Rosia Montana to be saved” said Eugen David, president of the Alburnus Maior Association of local residents. 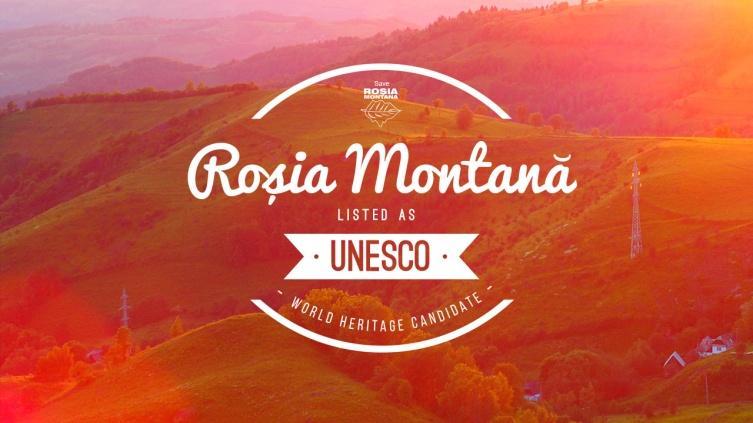